skip to main | skip to sidebar

Pompey may swoop for Argintinian

Harry Redknapp is reportedly set to make a late transfer window raid and take Real Mallorca striker Jonas Gutierrez to Portsmouth.
The Pompey boss admitted earlier in the week that he felt his business in the January window had been concluded following the arrival of Lyon striker Milan Baros on loan to add to his permanent capture of Lassana Diarra from Arsenal. However, following news that striker David Nugent will fly out to see a German specialist over fears he requires a hernia operation, Redknapp could be tempted to add another face to his forward line.

And it is claimed in Spain that 25-year-old Argentinian star, Gutierrez, who is renowned for donning a Spider-Man mask to celebrate a goal, could be the subject of a £7.5million swoop before midnight on Thursday.
If a fee is agreed between Mallorca and Pompey then Gutierrez will reportedly be handed a three-and-a-half-year deal and wages of £35,000-a-week.
Posted by mr x at 11:12 AM 2 comments:

Arsenal Football Club have confirmed their interest in Edin Dzeko. The Gunners have been watching the talented 21-year-old Bosnian international striker this season, and they could move to take him from Wolfsburg before Thursday's transfer deadline. "We have been following Edin Dzeko. He is a type of striker which can be a success in the Premier League," first team coach Boro Primorac told SAN."It is not certain at all if we capture him, but his performances have been better and better day by day. If you want to buy such player, you need plenty of money."
Posted by mr x at 11:46 AM 1 comment:

Manchester City manager Sven Goran Eriksson is reportedly on the trail of CSKA Moscow's Brazilian striker Joao Alves de Assis Silva. Eriksson has made no secret of his desire to beef up his attacking options before the transfer window closes and has been linked with the likes of Real Zaragoza's experienced Argentina international Diego Alberto Milito and Djibril Cisse of Marseille.

Now, Eriksson has turned his attentions to 20-year-old 'Jo', who was the stand-out performer for Moscow in their Champions League Group G games. The tall and imposing striker, who helped Moscow win the 2006 Russian Premier League, has one Brazil cap and has been catching the eye of a number of Europe's top clubs.
Posted by mr x at 11:43 AM No comments:

FC Barcelona ace Deco’s revelation that he is on his way out of the Camp Nou cathedral has sparked a widespread transfer speculation in the English Premier League. The Daily Mail reports that a host of Premiership clubs is now vying against each other to lure the 30-year old Portuguese international midfielder in the summer.
Deco said: It’s not a question of whether I feel valued or not, it’s because I want to win. If I can’t help the club win, perhaps I should leave.
Posted by mr x at 12:20 PM No comments:

Celtic in shook move for Hyppia 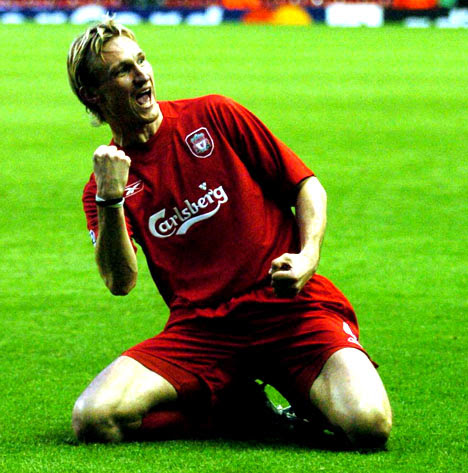 Scottish champions Celtic are in Liverpool to airlift defender Sami Hyppia from Anfield. Well, the move is not expected to materialize until at the end of the season but Gordon Strachen is eager to convince the 34-year old Finnish international of joining them.
Hyppia’s contract with Liverpool runs out at the end of the season but the club hasn’t given him a new contract yet. At the end of the season, Hyppia will be a free agent and will be able to go to any club that he would like to. Liverpool manager Rafael Benitez doesn’t appear to be too eager to keep the old legs at Anfield and the American owners too seem not to regard Hyppia too highly.
Posted by mr x at 12:17 PM No comments:

Flamengo in Talks with Ronaldo

Flamengo, five times the Brazilian champions, are reported to be in talks with AC Milan about acquiring the out-of-favour striker, Ronaldo.
Kleber Leite, the Flamengo vice-president, said Milan directors have authorised the Brazilian club to approach Ronaldo, who is in Brazil on vacation and to treat an injury.
“This is not a marketing maneuver,” Leite said in yesterday’s editions of the O Globo newspaper. “It’s a negotiation I’ve been conducting for the past three days, without sensationalism. I’ve talked twice with [Milan official] Leonardo and Ronaldo.”
Leite said both parts appeared interested in a possible deal, but stressed that nothing had been agreed yet.
Posted by mr x at 12:13 PM 1 comment:

City may have to sell Richards

Manchester City are agonising over whether to cash in on England starlet Micah Richards or break their pay scale to keep him for an extra two years. And, with Richards reportedly asking for £75,000 a week, the odds are on him being the subject of a bidding war between the country's top clubs in the summer.

Richards, 19, is one of the most marketable young players in the country. And while City would like to hang on to him, club officials believe they could demand £15 million for him in the summer, confident that manager Sven-Goran Eriksson could then bring in an experienced replacement for less than half that amount.

Micah Richards: his pay demands may be too much for Man City
Richards was quoted in yesterday's Manchester Evening News saying: "It is frustrating to hear people talk about my new contract at City and make out that the reason I haven't signed yet is because I am being greedy when they don't know the facts. I have still got two-and-a-half years left on my current deal - it is not as though I am in my last year or six months - and things don't happen overnight."
Posted by mr x at 9:44 AM No comments:

Lescott (pictured) has become one of Everton's most valuable players in just 18 months since joining from Championship side Wolverhampton Wanderers for a sizeable £5 million.
The versatile defender earned a place in Steve McClaren's England and, despite not enjoying his best performances, few doubt the talents of the 25-year-old.
In what is a slightly tenuous link, the News of the World reports that title rivals Arsenal and Manchester United are monitoring the Everton stopper's situation, as recent contract extensions for the likes of Tony Hibbert and Leon Osman have reportedly pushed the ex-Wolves man down the payment pecking order, much to his dismay.
Arsenal in particular are said to be interested in Lescott, with it even rumoured that Arsene Wenger had attempted to swoop for the defender when he initially ended up signing for Everton.
Posted by mr x at 9:36 AM No comments:

Who will win the UEFA Champions League?